A 1942 War poster. Ironically, it was referring to unions

Do you even know what’s happening to your news? Media companies are tracking the hot terms that people are searching for from minute to minute, and when those terms come up on their computers, there’s a little button. Hit that button and a new rough draft is created with those search terms as the topic. That way, by focusing on coverage of what’s hot, “news” organizations catch viewers.

You don’t hear about things because that thing is necessarily important. You often hear about it because people are searching for it on Google today. This way, Nicole Richie’s wedding is covered more than Richard Holbrooke’s death.

Until a few years ago, your newspaper would send someone to cover the City Council meeting because it was an important service to the community. Not everyone would read that story about the meeting. They might flip right past it on the bus or in the coffee shop. But the City Council members watched their step because a journalist was watching. That’s what they called journalists: watchdogs.

Not anymore. Once media outlets gained the ability to actually know how many people click on each story, the temptation was too great. Rather than presenting news because it’s sometimes the best thing to do for our country and our communities, the news has been nearly completely monetized by corporations. And, as we know, pretty much every news brand is owned by a corporation.

Recently, Nikki Usher, writing for the Nieman Journalism Lab, took a contrary point of view in her post “Why SEO and audience tracking won’t kill journalism as we know it.” The crux of her argument was this: “…journalists, for too long, have been writing about what they think their readers ought to know, and not enough about what their audiences want to know.”

I wonder if she’s a parent, and if she is, whether she raises her kids that way.

Let’s not paint a misty picture of that dinosaur, the old-fashioned newsroom. Even newsprint men wrote a lot of stories merely to feed the appetite of what people wanted to know. Too many. That’s been one of the pillars of the paper since the days of Yellow Journalism, when Helen Jewett’s hatchet murder was the crap du jour.

So Usher has conveniently edited her portrait of historic journalism. She also doesn’t quash any of my SEO fears; she affirms them. She merely looks down her nose at the healthy watchdog function of traditional journalism the way a 7-year-old sniffs at spinach. She also unwittingly succumbs to one of the oldest journalistic tricks in the book: Be contrary, and you’ll be read. Perhaps it’s the same impulse that makes me want to contradict her on my blog.

It’s certainly true that newsrooms are catering to clicks. Yes, journalists in even the best newsrooms craft news they feel is important. It’s a critical function of editors and writers — and merely by choosing what’s important enough to cover they reveal, by definition, a bias that cannot be removed from journalism.

I know there’s an overclass of largely educated, information-hungry people who swear Twitter is uncovering the world’s great ills and revolutionizing revolution, but I would argue that most of its successes have been at shining additional pinpoints of light on areas already in the spotlight. It’s certainly not reaching a wide enough audience to right the wrongs of the local City Council, and there’s no one behind it who can dive into a sleazy corporation’s file cabinets and come up a month later with redemption clutched in their fist.

And since Twitter posts only reach the people who have elected to follow their chosen writers, until there’s a wayward re-tweet to filter out to a new audience, posts actually serves to isolate people in their own bubbles of self-interest. I wrote about the growing intellectual dangers of “personalized” content here last fall.

When you make news too social and slavishly desperate for clicks, the watchdog stuff doesn’t get seen. Oddity wins, not boring old justice, and great stuff gets lost every day. You’d have gulp many gallons of the social media Kool-Aid to think that the much-touted “democracy” of the Web solves all ills. It doesn’t, just as unchecked capitalism can create some pretty hefty poverty problems for the lowest rungs of society.

And the City Council meeting goes uncovered, and the greedy government and corporate ravens rampage without notice. Even if a writer gets the whiff of shady back-room deals or wrongdoing masked by by a thicket of impenetrable paper, the low margins of the Web mean that no one’s paying anyone to put the time and elbow grease into an investigation. When writers get $15 a post, how could they?

Click-derived stories and social media gossip are rapidly leading us to an even larger echo chamber than the one we’re living in now, where newsrooms pump out stories on topics they see appearing on Google Trends, to masticate regurgitated topics of proven tastiness, and to chime in, not break stories. Hollywood began subsisting on recycled rehashes a half-decade ago. Now it’s the news’s turn.

American news coverage has always struggled between profit motives and watchdog service. But the Web made response measurable. Now pure capitalism rules all, and there’s no room for that do-gooder parasite, the watchdog.

Be careful, America. Darwinism is not democracy. 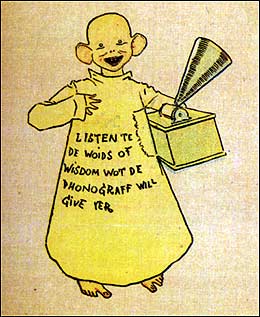 Left to our own devices, we're seduced by the latest ones