With everything except the central meeting hall in ruins, this memorial has come to stand for Manzanar. June 2013

The history of the United States could fairly viewed as a succession of excuses for not living up to its contractual obligations.

All men were not created equal, according to the Declaration of Independence: Slaves were allowed. The Supreme Court said the Cherokees were a sovereign nation: The South took their land anyway. Every citizen was entitled to equal protection, according to the Fourteenth Amendment: Women still couldn’t vote for another 60 years, and the Civil Rights Act had to wait another century. Martin Luther King, Jr. went to Washington to cash a check, but his people are getting paid on the installment plan.

In our living memories, few stains are more indelible and illustrative than the internment of Americans of Japanese descent during World War Two. They were American citizens, but that didn’t matter to the government. They were locked away in one of 10 residence camps, and by the time they got out, many people had lost everything — homes, businesses, all gone, wiped out. George Takei and Pat Morita are just two of the well-known people who endured these places and rose above them. Many others were affected for the rest of their lives.

I recently went to the isolated Owens Valley in east central California for a forthcoming feature that will be published by the New York Post. In the spirit of my visit to the little-known concentration/POW camp of Andersonville, Georgia, I shot a video tour of Manzanar, which was made a National Historic Site 40 years after the war ended. By then, most of the barracks had been sold to soldiers for tool sheds and cheap housing. They usually bought them for more money than the typical detainee received from the government upon liberation.

Ironically, this National Park unit is run by the Department of the Interior, which is the very same government body that oversaw the incarceration of legal citizens through the War Relocation Authority.

Images and sounds make unpleasant facts real. Here we have another testament to the fact the American dream is often just that. These people were put in a position of having to prove their patriotism, and we should no longer have to underline that they were patriotic — their rights should have always come first. The museum says that because the government wouldn’t issue them a flag, they would salute an empty corner instead. That symbolism is rich.

Perhaps it’s not difficult to imagine, considering the stink Fox News made about the potential construction of an Islamic community center a few blocks away from Ground Zero: Americans are always ready to disregard their Constitution as long as it flatters their fears. 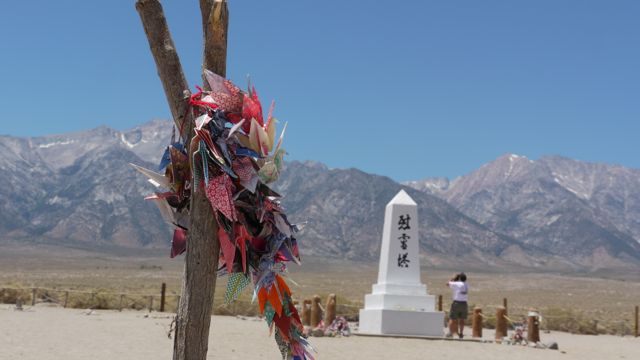 Paper cranes for those who never got out of Manzanar alive. How many more lives were broken forever?