Rosewood's marker: Half the story, but whose half?

Today I visited Rosewood, Florida, a town with a past so tangled that its historical marker requires two sides to tell it.

That sign is pretty much all there is to tell the story. That’s because Rosewood was erased.

It was torched by racists in 1923. The tale is as convoluted as it is painful, but the short version is that there were once two towns, one mostly white and one black (Rosewood). One day a white person accused a black man of doing something terrible, which happens a lot when scapegoats are required, at which point hundreds of the whites exploded into a bloodthirsty rage. They didn’t just kill people (mostly black, but some whites who tried to stop the slaughter, too), but they hunted them for a week. Rosewood residents had to hide in the woods like animals, only to be cut down when they finally emerged. To finally rid the area of blacks once and for all, the white savages burned Rosewood down.

For a long time, what happened in Rosewood was mostly whispered because no sign or museum in the place itself dared to summon the story. As recently as the ’90s, plans for a monument were shelved because the locals powers disagreed on how much to spend.

Politicians pat themselves on the back

The historical marker was installed only in 2004, despite the fact Hollywood, our most effective national memorializer, had made a movie version in 1997. Most markers in the American South tell the same story on both sides, but Rosewood’s is a cliffhanger. The first half of the story unfolds on the western face (which is odd considering the only civilization in that direction, near the lip of the Gulf of Mexico, is Cedar Key). In it, the dissenting whites are “courageous” while residents of the “predominantly colored” community of Rosewood, apparently not courageous enough to be described that way, hide in the woods.

The flip side consists mostly of a roundabout explanation of why the sign took so long to get there. You see, the sign apologizes, the victims refused to talk about it. Fortunately, and as a matter worthy of casting onto a metal marker, a Democratic governor got the ball rolling. A decade later, a Republican one (a Bush, no less) finally accomplished the mission, and made sure the final line of the long-neglected plaque memorialized the fact.

The saga of why Rosewood was denied its due is nowhere equal to the sorrow and horror of the tale itself, but politicians seem to think so. Their bipartisan collaboration takes more space to relate than the more complicated reasons for the violence, and the retelling of the violence, too, reads as if it was written from the white perspective.

It’s said that most racial disputes are ultimately about money — who’s perceived as taking jobs, who’s perceived as causing crime. In Rosewood, black residents owned their own businesses and their own land, and one of the first things the whites did that week was to loot their property and steal their land. Survivors were too terrorized to ever return.

Rosewood, near the west coast of Florida where the state begins its westward bend toward Alabama, is one of more than three dozen black communities that were eradicated by frenzied whites, but above the others it remains stained. I drove down its unpaved roads. There are a few noticeably modest modern homes there now, buried deep in thicket and protected by barking dogs that, judging by their sensitivity, are clearly unaccustomed to even casual drive-bys. Two homes had American flags hung by their mailboxes (they also took the local paper, too), and I saw one middle-aged woman cutting her side lawn with a mower that didn’t seem to be smeared with human blood. (For a video of the town today, click here.)

I’m sure they’re very nice, normal American people there now, with no festering furies. But given the fact the town’s reputation was stained by simmering anger that suddenly bubbled over, it’s not hard to imagine an unwelcome malevolence in these normal yards. When I heard an unseen dog bark in agitation and saw a U.S. flag hang limp on a windless May afternoon, it was hard not to smell underlying threat in the air in Rosewood.

UPDATE: A year later, I revisited Rosewood, and I shot a video. Click here to watch it. 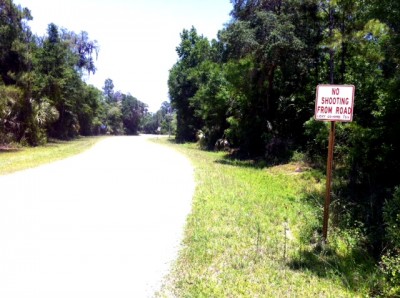 Shoot in the woods instead, as per the unwritten tradition