At least, it was when it began.

It was in the Depression of 1873. A few years before, a bunch of greedy New York bankers artificially jacked up the price of gold, causing a financial panic and sending America into a slump that lasted for years. (Sounding familiar yet?) 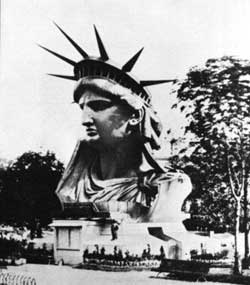 Going topless used to be more noble in France

Anyway, at the time, France was best buds with America, or at least it was better at pretending to be. It had helped us win our own Revolution less than 100 years before, and French war heros such as Lafayette were still household names Stateside. Back when getting a statue was the equivalent of landing a Nike endorsement contract today — the highest honor a society could bestow — someone European got the idea that there should be a statue to freedom. Things were looking dicey in France at the time, and America had just come out of its own Civil War, which finally emancipated the slaves at great cost.

Suffice to say that at that time, freedom was looking a lot like something that ought to be preserved as a statue in case we forgot about it once and for all. (Still not familiar yet?)

It was decided that the French and the Americans would go Dutch. The body of the statue would come from France while America would foot the bill, so to speak, for the pedestal. The sculptor, Frédéric Bartholdi, built some of the torch-bearing arm as a sort of teaser for the final thing.

In 1876, the right hand of the Roman Goddess of Liberty, which knew not what the left was doing because it didn’t exist yet, was uncrated in New York City’s Madison Square. It was hoped that the sight of 12-inch fingernails would inspire Americans to donate money to the construction of the colossus.

But there it sat, by the side of the road, a hand eternally begging.

That begging hand of Liberty sat there for longer than anyone could remember. It became a nothing but a big joke, and an embarrassment. A colossal embarrassment, in the literal sense. No one could afford to donate. Worse, they thought it was in poor taste. The newspapermen, who were the Bill O’Reillys and Gawkers of their day, mocked it every chance they got: Americans shouldn’t let the French build their monuments, they said, and everyday Americans shouldn’t have to pay for New York City’s follies, and we can’t afford frivolousness like this in these times. Even the committees assigned to raise funds never met. It became hard to tell if Americans didn’t care about freedom, or if they just had very specific tastes in neoclassical anthropomorphic polythestic art.

The depression ground on, and still that stupid hand stood in the park, weird and brown, just feet off the ground, ignored like hallway furniture. Meanwhile in Paris, Bartholdi tried displaying a disembodied head to get crowds excited (well, it worked with the guillotine). But apathy reigned.

It was the age of the railway barons, but no big donor stepped forward to give the goddess of Liberty her perch. Not a big grant from the ranks of the Robber Barons like Cornelius Vanderbilt, from the entrenched political machines like Tammany Hall, or from art collecting titans like J.P. Morgan.

In the end, that creepy hand gathered scorn in Madison Square for six long years, which is a very long time no matter how you look at it, but is a stubbornly long time to endure blistering P.R.

It took nearly 20 years for Liberty to find her place in New York Harbor. She was paid for the hard way: penny by penny out of the savings of a people clawing their way past the nightmare of the Civil War and a chilling economic depression. After one newspaperman, Joseph Pulitzer, pled its case in the press, some 120,000 people contributed, many of them schoolchildren. Most donations were less than a dollar. Mind you, it’s entirely possible they just wanted the ugly thing taken out of their park once and for all, but regardless of why they did it, people got together and bought Liberty a pedestal.

Naturally, when she was completed, the pinstripe-suited crowd jostled each other to be first in line to take the credit. There was a parade, showered by the ticker tapes of the financiers who had mocked the high-minded project from the start. President Grover Cleveland, busily hurrying toward his well-deserved posthumous anonymity, arrived in New York to mark the occasion.

The lesson, of course, is to always be patient. Things will change. Laughingstocks can become icons. Even when things look bleak, or when you can’t envision the path forward, or when your idea appears to be so detested that all hope is gone, you can eventually come through and create something enduring to be proud of. Liberty can take its sweet time. 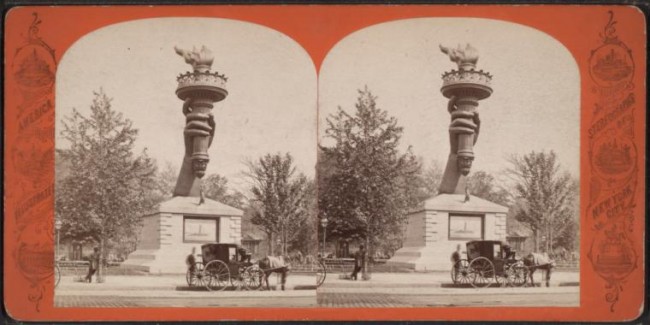 She couldn't get a hand, not even stereoscopically

2 Responses to “The Statue of Liberty is an Embarrassment”